Jill’s mindfulness techniques for writers and all creative humans on Your Mindful Hour podcast.

It’s back to school time!

If you are hoping to put your brand new school supplies to work, give a listen to Panio Gianopoulos‘s interview with me on the fab WRITERLY podcast. I share some ancient tips from my experience as a writing coach and editor.

On Wednesday, December 5th, 2018 for the first time Pen + Brush, which for over 124 years has provided a platform to showcase the work of professional, emerging and mid-career female artists and writers to a broader audience, will feature three members of
The Writers Room in reading. WR member Jill Dearman, WR alumna Marcy Dermansky and former WR board member and current member Fatima Shaik. The Pen+Brush’s stunning gallery space is located on the ground floor of 29 East 22nd Street, between Broadway and Park Avenue. The evening starts at 7 pm.

Press for The Great Bravura

The Brooklyn Rail  features noir scholar and author ROBERT POLITO‘s in depth interview and discussion of noir with Jill Dearman.

NPR: The Author’s Corner for the week of December 14, 2015. Jill Dearman reads two excerpts from The Great Bravura.

Buzzfeed named The Great Bravura one of its “5 LGBT Books to Binge Read this Fall,” in the company of Alan Cumming’s new memoir.

Go Magazine called Jill Dearman “The new Queen of Noir” in a feature story on “Lesbian Noir and The Birth of a Novel.”

The Reading Room included The Great Bravura in its “12 Books to Match Your Fall TV Obsession” round up.

Pop Sugar recommended The Great Bravura as a top LGBT book pick for 2015.

Your Tango recommended The Great Bravura in its end of the year round up of books by women. 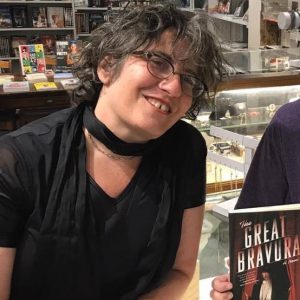 As our headlining author, Jill Dearman will read from her debut novel, The Great Bravura about a lesbian magician in 1940s NYC caught up in a love triangle of her own creation. Jill will talk with us about noir, the writing life, and more.

Co-produced by Lamprophonic and Summer on the Hudson, AmpLit Fest is a free, daylong festival that brings authors of all backgrounds, styles, and levels of recognition to center stage. With readings, workshops, panels, and a community market, AmpLit Fest makes one of life’s most solitary acts — writing — a public celebration. http://www.lamprophonic.com/amplit-fest/

We closed out the year with a reading at CORNELIA STREET CAFE in NYC on December 16th, with John A. McCaffrey.

Our launch party for The Great Bravura on November 16th at Weather Up Tribeca was a huge success. Books were graciously sold at the event through Mystery Icon Otto Penzler’s “Mysterious Book Shoppe.” See incriminating photos above!

Signed Copies can be bought in person or online.

Blurbs from Cool People Below!

“A rich, noirish picture of Olde New York with a punk sensibility that rocks the senses. Dearman’s characters are twisted,doomed, with a lust for life.”
—Roberta Bayley, photographer and author of Patti Smith and Blank Generation Revisited: The Early Days of Punk Rock.

“Sapphically ardent, meta-absurd, and Nin-sexy all at once, Jill Dearman’s tale is a triumph of mysterious pleasures: a Colette martini with a drop of Robbe-Grillet vermouth and a Jeanette Winterson olive.”
—Michael Atkinson, author of Exile Cinema and Hemingway Deadlights.

“The Great Bravura straddles two worlds: her feet are firmly planted on earth, among a gritty ragtag group of early-20th century circus performers, while her hands reach for the stars, drawing the reader into a magical mystery realm where fantasy and sorcery are commonplace. Dearman builds on the tension created by the two milieus bumping into each other on the page to ultimately create a morality tale reminiscent of another era―the tragedies of ancient Greece.”
—Aaron Krach, artist, journalist, and author of Half-Life.